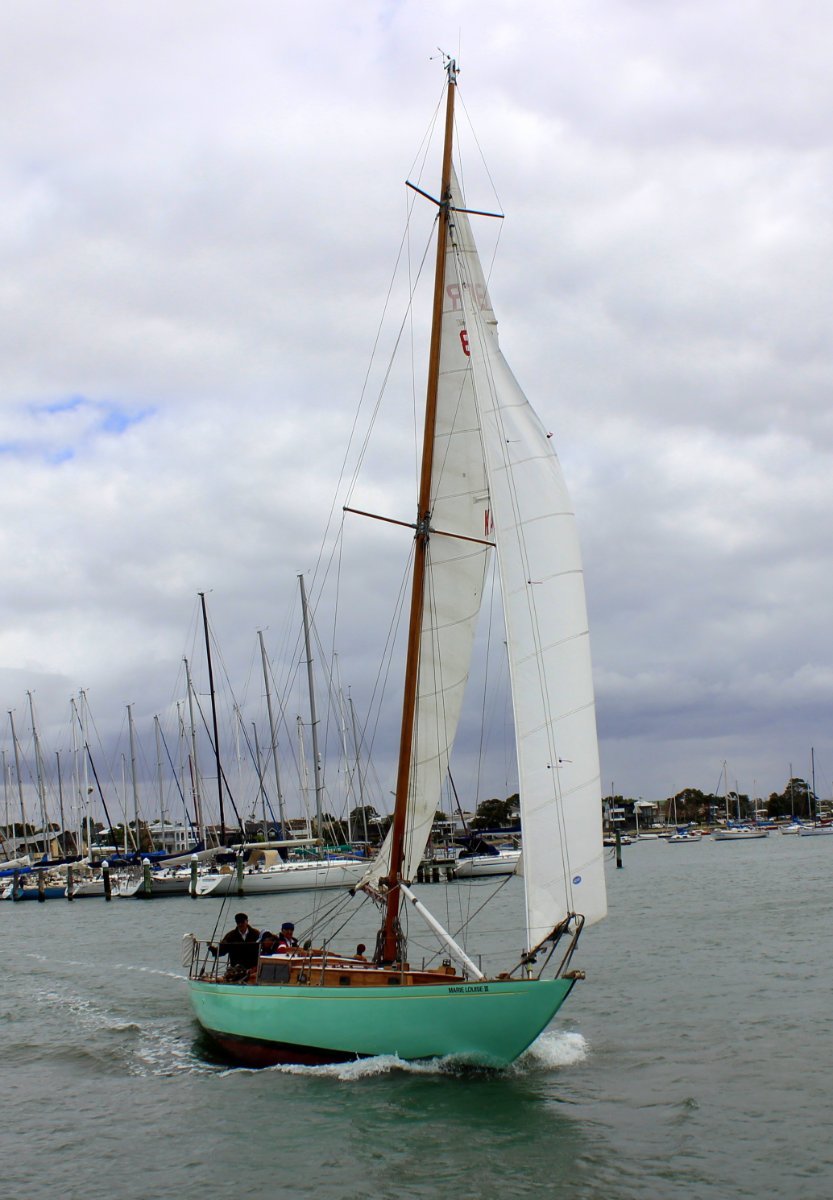 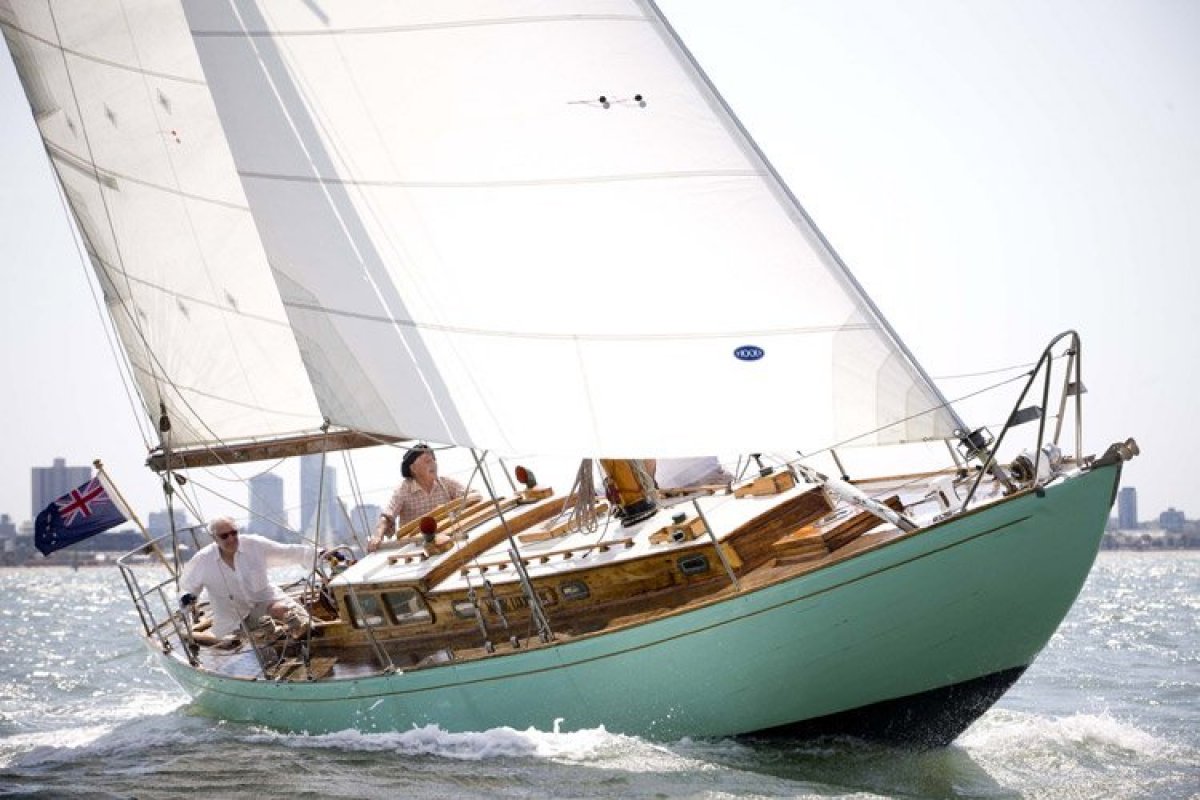 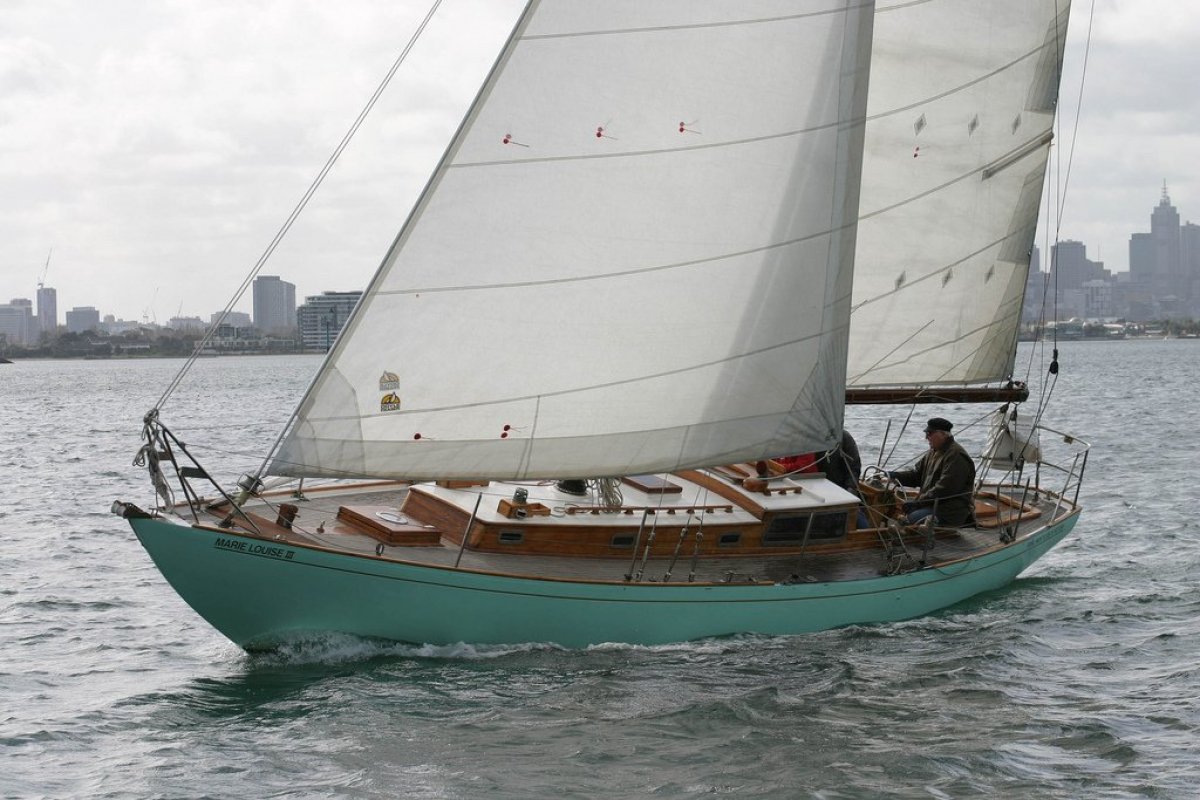 Start Auto SlideShow Stop Auto SlideShow Full Screen PopUp
Price
AU $59,990
Details
Fast, graceful, and elegant with sweeping sheer and overhangs. She is incredibly nimble under sail with great charm and style. Equally at home cruising single handed or crewed up and racing around the sticks under spinnaker.

Accommodation:
The interior is finished in Huon Pine and white painted surfaces and green cushions. Marie Louise III has two 6ft berths plus headroom throughout main cabin, quarter berth and vee berth. The main cabin/saloon has a folding dining table which can easily fit 6 people. Toilet - There is a manual pump out head located in the bow.

Galley:
The galley is in the main cabin next to the companionway stairs. There is a single sink with an additional are which is suitable for preparations. The galley includes:
- 2 burner spirit stove
- Ice box
- St Steel sink

Cockpit: The cockpit is well set up for short-handed sailing with wheel steering and 4 bronze self-tailing winches and has good protection from deck water via high cockpit coamings. The cockpit also features a classic compass.
On- Deck: On deck details such as bronze deck hardware including cleats, air daurades, winches etc add to the charm of the vessel. She had new windows fitted in 2010. There are two mast mounted bronze self-tailing winches.

History:
The International Metre Class evolved in London in 1906, with rationalistion of the many different rating and handicap systems that existed at the time. This new formula, the Universal Rule, allowed yachts from many countries to compete against each other. The numeral designation i. E., 6,8 or 12 is a result of formula measuring the major design aspects. This rule has been in use since its inception, and it was the basis of the America´s Cup Yachts for the best part of the 20th century. The 6 and 8 meters are still very strong in Europe and have been competing for over 100 years.

In Australia, the Sayonara Cup was commenced in the early 1900s and the Universal Rule has applied throughout - lately being competed for in 6 metre yachts. After Second World War demand for the traditional 50ft ''racing'' 8s was virtually non-existent. This led to the concept of the 40ft 8 metre Cruiser/Racer. McGruers on the Clyde in Scotland were at the forefront and built some 15 examples in the 1950/60s, as did several other European yards.

Marie Louise III is indeed a very fine example and believed to be the only one in Australia. In 1953 Bill Lowe, a member at RYCV, commissioned J. J. Savage and Sons to design and build (to the Rule) an 8 Metre Cruiser/Racer to be named Mongoose III. In her first year she was sold on to fellow RYCV member Richard White, renamed to Marie Louise III where she competed successfully for several decades. Then owned by the VALHALLA syndicate, a group of Past Commodores at RBYC for some 10 years.

Around the late 1980´s new ownership transferred her to the Sunshine Coast, Queensland. The deck was replaced with New Guinea Rosewood, steering converted from tiller to wheel (original tiller kept as emergency) with auto pilot and singlehandedly cruised extensively along the Queensland coast.

The current owner purchased this classic boat in 1997 and returned her back to RYCV where she was an inaugural member in the formation of the Classic Yacht Association of Australia. She has since continually competed successfully in both the CYAAs and club events. The white paint which everything had been coated was removed and the original distinctive pale green topsides and clear coated timber spars restored. Apart from the afore mentioned deck, a complete restoration has not been necessary- just routine maintenance on a need´s basis on annual slipping. In the last decade chain plates and keel bolts have been replaced and mast out and rigging replaced.

She is therefore somewhat unique in being in such original pristine condition, testament to the original build integrity.
You can read more on CYAA website.

On handing the boat over, the previous owner intuitively wrote the following: ''She is not just a boat, she is part of our maritime heritage and most of alll a thing of great beauty, a symphony of wood, rope an water, an object created by man with the only object to make us feel good about being alive. We are only caretakers and with luck she will outlive you and me. Future generations will think of us and will silently thank us for having seen her through the ages. ''